There is little "new" to report, however good progress is being made on most fronts advancing the tasks already started. The seats inside the two compartments, the guards seat and exterior wooden beading on the guards end of the coach are all a little closer to completion. 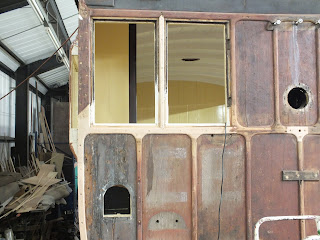 This underframe project is now moving forwards briskly again after the operations department, to which we are grateful, moved it back to our workshops after an extended sabbatical in storage at Holt. 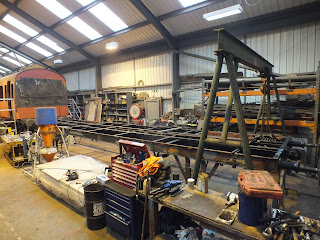 The frames were quickly lifted and both wheelsets removed to allow the underframe to sit on stands. At this point, the Axeman returneth and worked his sparky magic on two of the four springs which are now off the vehicle and on a pallet outside. More of the original frame has been "nibbled away" (again by a hungry Axeman) in the areas which couldn't be done last time as they were still holding the wheels on! 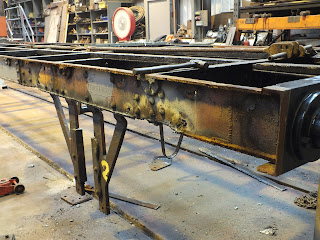 The coach remains "in the air" which has rendered the interior out of bounds. Underneath however, some cabling has been terminated inside the fuseboxes which completes previous routing of the cables inside the carriage. The two areas currently being installed are the power cables for the speaker system and the feeds for the sockets we installed to allow the future use of table lamps for dining purposes.

Results have been rapid on the Holt end bogie which is now fully scraped down and has been in the process of painting this week. Primer, undercoat and gloss were all applied in quick succession over several days to produce a fine specimen by Friday... 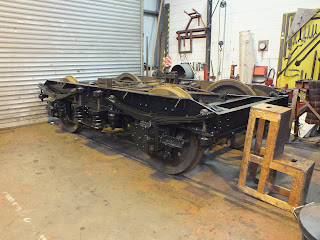 The iron fist of progress reported last week has been maintained this week, with a major push on floor laying resulting in the entire second class half of the carriage being fully floored. It is a real visual boost and it's great to be able to walk around unhindered inside the carriage after so long without a floor. 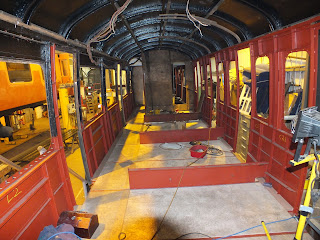 Although not required just yet, more coats of varnish are going onto the wooden window surrounds, which will make interior restoration a lot quicker and easier in due course. 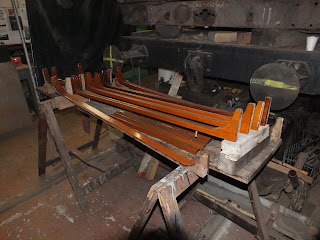 On the exterior, the drilling of all the holes for the window fixing studs is now complete, and a start been made on welding the studs themselves into the holes, and then tidying up the outside where the heads will eventually be lost underneath the paintwork. The first few windows have already been completed. 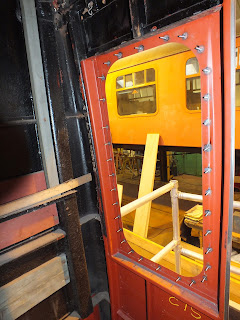 Bodywork on the Holt end continues, with repairs to the seaward bit now finished and the landward bit getting the same treatment. Reproductions of the original end steps have now been added, which returns the end to as-built condition which we think is a first for a Mark 1 CL in preservation. 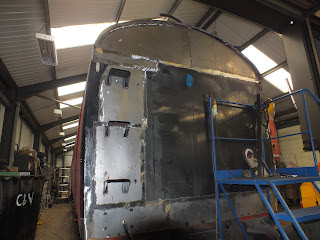 After a long and torrid journey, the last of the sanding and filling has now been completed on the exterior (yay!) which opens the door for the vehicle's final paint job (I hear a low oooooooh coming from the crowd!). The roof and sides are now being cleaned as they have to be free of any dust before any painting. The area of workshop around the carriage has also had a major tidy and hoover up to neutralise as much dust as humanly possible. 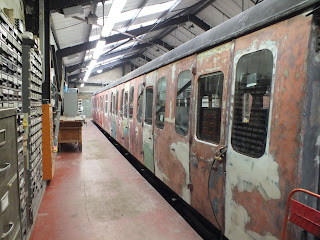 The footboards mentioned last week have been coated in undercoat this week, with a few making it into gloss on one side. 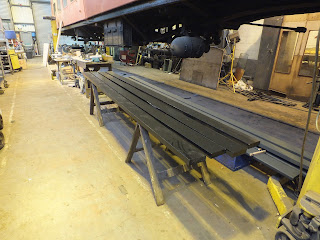 Another "mini footboard" has also been produced, and this will go on the end of the coach on some brackets, where an original once sat to allow maintenance crew to climb up the end of the coach to inspect the toilet pipes. On the subject of these pipes, they were found to be leaking in three places some time ago, and these holes have now been welded up so the toilet water tanks can hopefully be filled again without getting a shower! The grab handles have also been polished so that they are ready to bolt straight on one the paint has been applied. 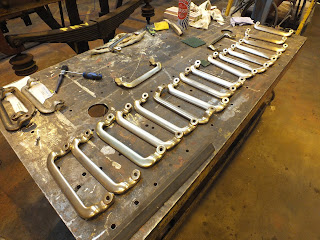 Kinder weather has allowed a small team to continue preparing the woodwork on the van for its repaint. 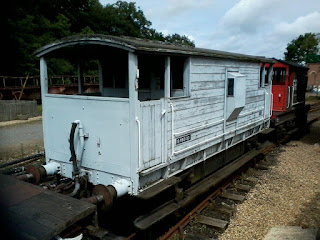 The seaward side has been rubbed down and a coat of resin to seal it has been applied. 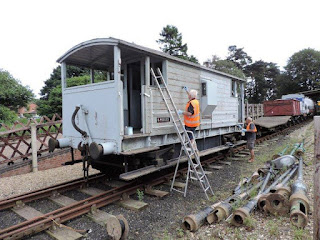 Posted by NNR Carriage and Wagon at 20:07