Gentle progress has been made on most fronts but no milestones as such have been passed this week. The exterior beading repairs, guards van shelving and modified guards van luggage doors are all ticking along nicely.


The two "PMV" wheels for this chassis, mentioned last week, have now been treated to a coat of primer, this drying rather quickly in this week's heat. More welding work has also been done on the landward side C section, with the Holt end being concentrated on.


Work to progress the bogie clean up, which is being done a second time as explained last week, has continued, with the Holt end bogie now in gloss and lowered onto its temporary wheelsets whilst its own are out for tyre turning. The Sheringham end bogie is now on stands receiving the same cleaning and repainting treatment on the insides of the frames.

The Holt end corridor connection, which has been lying in the yard for a while, has now been dug out and stripped down as it requires some metalwork repairs. So far, the end "faceplate" has been cleaned down back to bare metal and various broken studs have been drilled out ready for replacing.


Work to install the supporting timbers to the steel body framing, pictured last week, continues as this is a rather large job. At present two people are working from opposite ends, and should meet somewhere in the middle. The toilet pipework has also been suitably plugged up to allow a water test which failed in spectacular fashion requiring many buckets! The following day, the source was investigated and luckily, rather than the toilet tanks being split, some other pipework has decided to give up. On the Holt end of the coach, some more steelwork repairs have been done around various rotten areas, bringing this aspect of the restoration ever closer to completion. 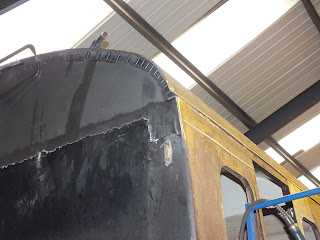 
Two coats of gloss Crimson paint have been applied to the carriage this week, transforming the vehicle entirely. Only the ends now remain to be painted gloss black. With the sides done, the brass grab handles have all been fitted and some minor painting tasks around them completed. Several people are now busy scraping off paint which has gotten into areas it shouldn't have, and generally working through a list of polishing and tidying jobs which will make the final appearance of the coach that little bit better. 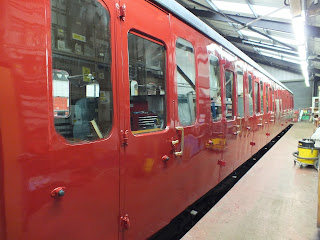 
with resin-ing completed, team Pete have wasted no time in moving onto the undercoat at Holt, with the seaward side of the vehicle being so treated... 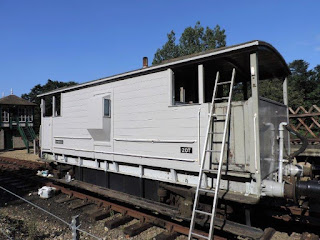 Posted by NNR Carriage and Wagon at 20:10