More good progress inside and out. The guards van wing walls, mentioned last week, are now firmly in position. 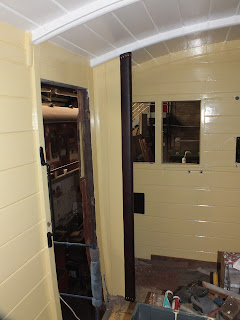 This has allowed a start to be made on the "guard's throne", a hinged seat complete with urinal underneath... The Great Eastern Railway really did think of everything! Readers with a good memory will remember that the urinal was fabricated from scratch some time ago before 853 even entered the workshops, so this has been pulled out of hibernation and test fitted within the seat which is starting to take shape. What a relief! 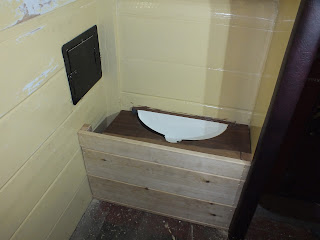 A set of seat bases and backs have also been fitted out in one of the two passenger compartments, giving a good idea of what their finished outline will look like. 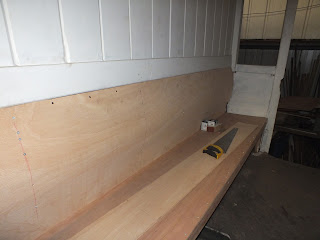 The curved sections of metal that go above the doors have been refitted to the interior, with some screws cut down to suit and the completed items painted. 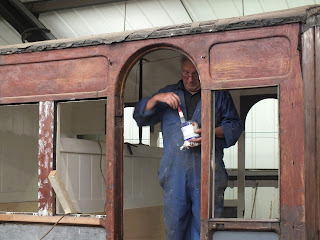 On the exterior, work to fit replacement beading to the guards end of the coach has continued.


Awaiting the operations department to return the underframe from storage at Holt back into the workshops.


The "top half" of this coach has now been set aside as it will have to wait patiently for E48001 to be completed and painted before room in the staged area becomes available to complete the final tasks and painting. The vehicle remains on jacks however and the cosmetic cleaning of the Holt end bogie has now started. 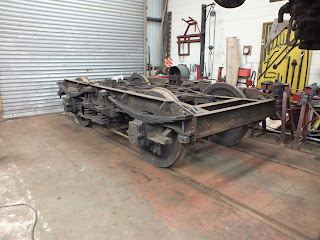 The Sheringham end bogie brakegear has all been dismantled, cleaned and inspected, repaired where required and put back together again. The Sheringham end bogie is now ready to be returned to the vehicle once the Holt end example has reached the same stage. To smarten its appearance and match the bogies, the sole-bars (outside edges of the main underframe) and bufferbeams are being cleaned and repainted black. So far the solebars are fully completed with the bufferbeams not far behind in undercoat.


There is currently four full time staff working on this vehicle so progress is increasing. The last of the bodywork on the Holt end is progressing well with a large section of wasted material on the seaward half of the end being cut out, some sections remade and then new panelling welded back in the original configuration. The top edge, where the end meets the curved roof, has corroded particularly badly and had been repaired with fibreglass in the past, so a lot of work has focused on this area.


More windows have been drilled out by Phil, in readiness for the studs (that hold the window glass in place) to be welded in (pictured last week). The fitting of the brand new flooring has now also commenced with two compartments already finished. It will be nice to be able to walk around the vehicle again without balancing on the underframe members!


The final, super-fine sanding and preparation work is now fully underway and it will not be long before painting can commence. Half of the carriage (the landward side and the Sheringham end) is now ready for paint, with the seaward side now receiving the same treatment. Some small loose-end tying up jobs have been completed now that the substantial components are all now installed. This has included the cleaning of the exterior door handles and door locks/plates, minor items I'm sure you will agree, however if they have paint and dirt and scratches on them it does detract from the final finish of the coach, so it is important that these small items look good when the coach is outshopped. The last of the lightbulbs have now also been fitted into the passenger saloons, and the lighting has also been installed in the two toilets. These have all been tested and the carriage lights up fully once more! The footboards for the coach, which were bought some time ago, are now being painted in readiness for fitting to the carriage once it comes back out of the staging. They have been primed so far.


No progress to report, other than the less than seasonal weather has been making outside work very undesirable!


The Quad-Art set has been oiled and prepared ready for Quart week soon.
Posted by NNR Carriage and Wagon at 20:25