This week has seen the four dining coaches receive their derogation to run on Network Rail between Sheringham and Cromer, which almost concludes the long task of getting the coaches to a suitable standard for "mainline" operation. Only an engineering acceptance and registration on the mainline railways' TOPS numbering system now remains to be completed, with both of these scheduled for the next week.


Exterior beading repairs and guards van luggage door restoration has continued to progress. The shelving for the guards area has now reached the gloss cream stage and they are starting to really look the part. 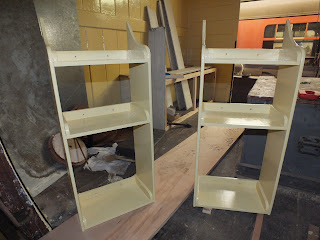 
Welding work continues on the chassis, and some more drilling of holes around the centre axle area has been undertaken. This has allowed the centre "W iron" to be test fitted temporarily. Outside, the good weather has allowed the two "PMV" wheels to be gloss painted. 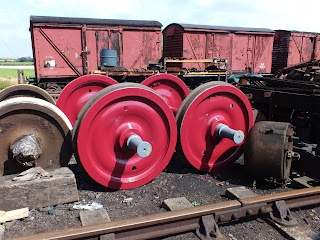 
To allow the coach to be moved whilst its wheelsets are on the wheel lathe, the two bogies have been temporarily reassembled with spare (non operational) wheelsets and then returned to the underneath of the coach which has been lowered back to ground level. E4641 was then shunted into the staging area where it will spend the next week. 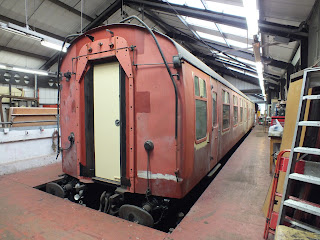 Work has continued on the Holt end corridor connection (introduced last week). The faceplate and associated metal trim have now had a coat of "rust-kill" primer, and the Axeman was promoted to putting bits on rather than cutting bits off, when he welded the two lamp irons back onto the faceplate! 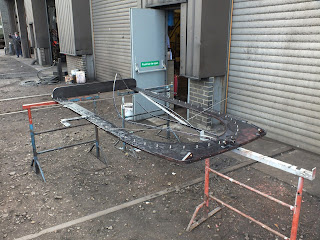 The metal bellows which go behind the faceplate were a bit rotten, so parts of it are having to be remade by our resident welder. 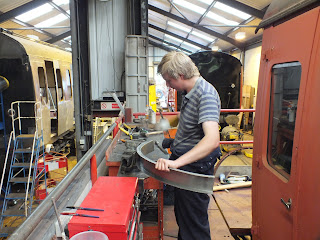 
Nothing too dramatic to report, with the interior timber installation and Holt end steelwork repairs progressing in similar vain to last week. Those involved in the timber fitting are hopefully glancing round the workshops looking for distracting forces, but alas they have been forced to remain in E43041 and plough on! 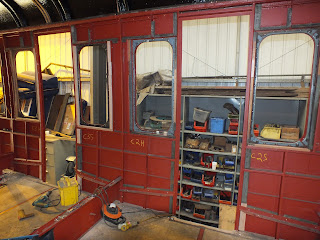 
Finishing tasks are now the name of the game on this carriage, which is now on the cusp of completion. All paint has been scraped off the windows, handles etc (anywhere it shouldn't be) and the landward side windows have been polished inside and out. 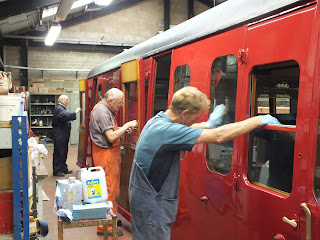 A final sweep through the interior is now being undertaken with varnishing of any dull-ish parts being completed. So far, the landward side has been completed. Odds & sods are also being completed in the toilet areas. The skirting has been satin varnished, a missing light fitted and tested and various door handles and locks etc (which had been removed for nearby varnishing) were also refitted. The connecting lighting jumper cables, located on the end of the carriage, have also been fitted in position, this was possible after the ends of the coach were painted gloss black, which was the last part of the main repaint work to be completed.


Some more undercoat has been applied.
Posted by NNR Carriage and Wagon at 20:08