Interior and exterior progress has been made. On the inside, a start has been made on constructing the folding guard's desk. In the absence of photographs this item has been interpreted based on a few clues including some "shadows" on the inside wall of the carriage.

The exterior, specifically the guard's end wall, has had some filler applied to compliment the new beading mentioned last week. 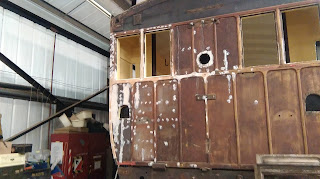 A start has also been made on a set of "double doors" for the luggage area of the carriage. These were missing on 853 as they had been removed to make way for a fireplace! Some spare Great Eastern luggage doors are being utilised, salvaged from a centre brake vehicle long since dismantled. They are similar but not quite the same, so are having to be dismantled for various parts to be altered so that they match the doors on the opposite side of the carriage, the originals for which survived. 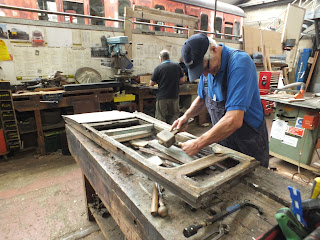 The obvious visual step forwards has been the lifting of the steel C section onto the landward side of the underframe making it look far more complete. 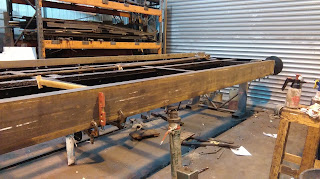 The Axeman finished what he started last week, dropping off the remaining pair of springs from the Holt end, which I believe will be one of the last PMV components to be removed, not being required for the underframe in its new 6 wheel format. 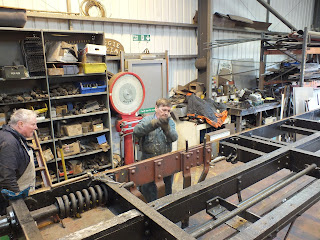 This coach has suffered a small set back in that the wheelsets on the bogies have been found to be sufficiently worn to not be suitable (at present) for registration for running between Sheringham to Cromer, after they were checked this week. This does not affect the railway's 2016 Cromer trains, as E4641 was never a part of these plans. However it is our intention to have E4641 available for 2017 as a "spare" coach in case a Cromer-registered vehicle is unavailable for whatever reason. To ensure this is possible, the wheelsets will now be removed from the bogies for tyre turning which will re-profile the tyres thus making them "Cromer ready". 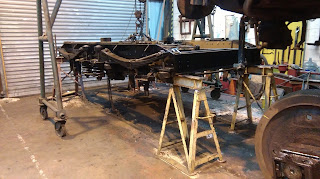 Progress has continued with welding the window studs into position and also welding up the paneling on the Holt end, in similar vein to previous weeks. Floor installation work has also continued unabated and is now completed, with the First Class section being installed this week. The curved sections of timber which sit in the doorways are now in the process of being machined and fitted. 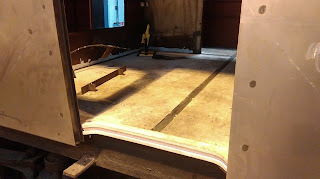 The toilet plumbing has been started, as previous experience with E48001 has taught us that this can be quite time consuming, so rather than be against the clock we thought we would start the toilets sooner rather than later. Before we proceed with full restoration, the large water tanks suspended in the ceiling need to be checked for leaks, so the first task has been to plug up all of the open pipework (where various sections are missing or were removed as part of the asbestos stripping) so that we can do a water test in the near future.

It has been all about the painting this week. The first coat of primer has now been completed around the whole vehicle. The roof has also been washed down and given a second coat of roof paint, having had the first coat about two years ago when the coach was last in the shed for early restoration. 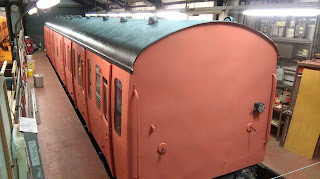 Both sides of the brakevan have now reached the rubbed down stage, and a resin sealant has been applied as a base coat.
Posted by NNR Carriage and Wagon at 22:42