Mainly interior work this week. In parallel with progressing the guard's folding desk, some more shelving has been started, again based on clues left inside the vehicle based on holes and shadows etc on the walls of the guard's compartment. 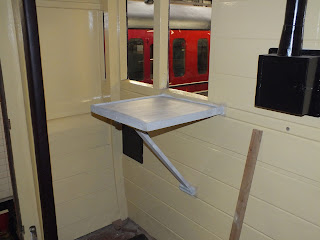 The formers which will support and give shape to the seat backs inside the passenger compartments have now been completed.


The landward side chassis-strengthening C-section continues to be welded to the original chassis. There is a lot of work to do here, so work for the Axeman is ongoing. Two of the wheelsets from the original flat, known as the "PMV wheels", have been cleaned up of old detritus which is certainly required before painting! 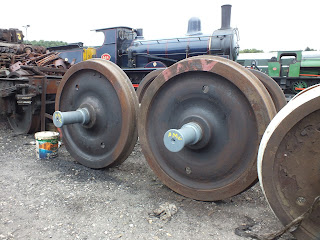 
Every cloud has a silver lining. The delay explained last week in wheelset turning has given the opportunity to return to the bogie frames, specifically the Holt end bogie frame, and give the insides of them a more thorough cleaning than was originally "budgeted" for. One bogie has already been cleaned down and painted in black undercoat.


A day has also been spent testing the lighting electrics on the vehicle. A few minor problems were found, including some connection issues with its new set of batteries, however by the end of the day the reading lamps and main saloon lights were shining on demand. There are still some control issues however, so more tweaking is required before the job is signed off...


With the floor now installed the supporting woodwork for the interior panelling has started to go in. A lot of original pieces were carefully removed and labelled up when the coach was first stripped down, so hopefully not much new material will be required. 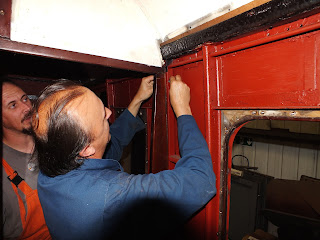 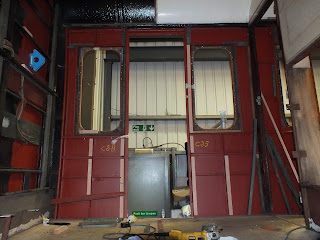 
To keep dust contamination to a minimum, the largely sole activity this week has been painting the vehicle. The roof has received its third and final coat of black, whilst the bodysides, ends and doors have been painted in undercoat. Next week should see the all-important gloss coat. 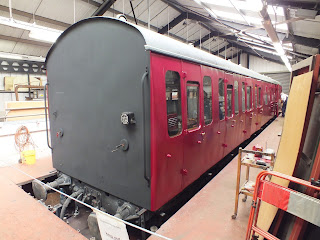 
More coats of resin have been applied all round the exterior and I am reliably informed by "Team Pete" (Peter T and Peter B) that the time for undercoat paint has come! This vehicle has progressed well given the recent good(ish) weather. 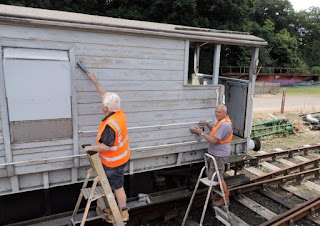 
Also at Holt, which is where Team Pete are now based (could we make the move permanent perhaps?!?), they have painted out the "South Devon Railway" regalia off the railway's newly purchased magical roundabout, making it far more presentable to the public whilst it sleeps in the goods yard prior to repairs and installation. 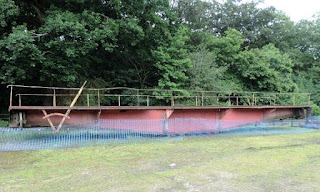 
The House Martins, which invade us every year, are now fledgling in the workshops and we are treated to the sound of mother feeding the young, presently on our safety line. 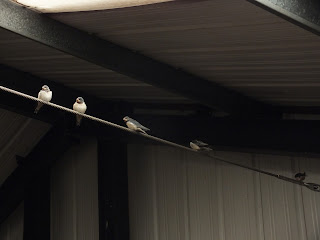 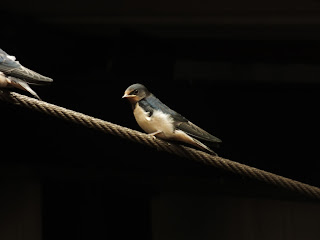 Also nesting are the Monkeys, Mrs Monkey having taken to the end of the shed nearest the doors for a few weeks presumably to avoid the House Martins. The Monkey's however seem to be leaving a lot less deposits on the carriages than the birds! 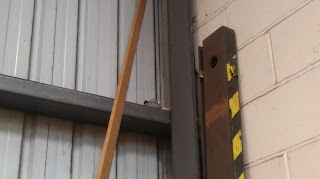 Posted by NNR Carriage and Wagon at 20:38