Work on the inside and outside of the carriage has continued steadily. At the Holt (brake) end work to repair an area of window ledge and associated beading has progressed well.

The centre gas lamp box and chimney, pictured in previous weeks, has now been fitted into position, and the doors for the left and right hand versions (started last week) have been completed. Well, we have to keep the Axeman busy somehow or else he will roam free and cause trouble to wider society...


Inside the two passenger compartments, the curved curved door plates, which were removed and restored last week, how been swiftly returned to their correct positions. All four seat frames are now also made, plywood cut for the seat bases and seat backs are now ready for fitting.

Finally a general clear up of the shed space at the Sheringham end of the coach has been undertaken, which had become a bit of a dumping ground. This has involved some surplus GER doors being relocated to the group's storage container.


Regular readers with a keen memory will remember the project to re-wheel the M&GN compartment coach currently in service in the vintage train. It is currently on an non-authentic 4-wheel wagon chassis which also gives passengers poor ride quality. A new and more historically accurate 6-wheel chassis is currently being prepared and will eventually carry the body currently in service. The chassis project was moved to Holt for storage last October when the space was required for the Quad-Art set re-varnishing and then later other priority work.  In readyness for the chassis returning for further conversion work, the two steel girders which are being prepared for the sides of the chassis have been moved from under GER 853 to the end of the shed in anticipation of its return.


The bogie men are getting stuck in, yet again, for "bogie improvement work" in the form of needle gunning and scraping the Sheringham end bogie for this coach. As mentioned last week, this will not be as thorough as the job undertaken on the Suburban 4 vehicles, however a good go is being made of cleaning off the outside (visible) edges of the frames and wheelsets in readiness for repainting which will improve the bogies' appearances considerably. 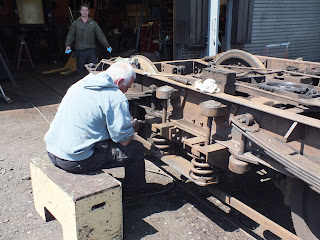 A quick chip down of loose paint is also being undertaken on the sole-bar in readiness for repainting.


A set of batteries has also been prepared for the coach and approximately half of them have been fitted into one of the battery boxes. Perhaps we will be trying the lights again soon after almost two years without them?

The inside of the coach is again like a flower blooming. This week, all of the silver heater pipe and heater element guards have been fitted along the sides of the carriage (at foot height) and under all of the seats which have heaters. These looked like fairly innocent bits of metal but each has to be fitted individually and took four man-days to complete satisfactorily. This done, the fitting of the seat upholstery itself has commenced. An image of these is being held back till the job is completed and we have a full saloon of seats, but already they are making the coach look practically complete inside.


Repanelling work on the landward side continues to progress, with the last window on the entire coach now being tackled by the resident welder. 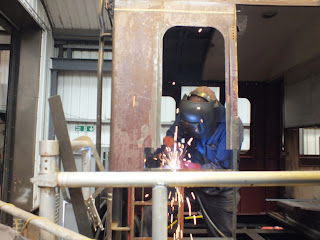 
Body preparation work on the landward side is now approaching the end of the carriage and will hopefully be completed next week. The interior has been transformed again after the seating was fitted (more parallels with E4641) over two days and more ceiling panels have been fitted to the toilet areas which brings these two sanctuaries closer to completion.


Another spare wheelset, this time of the "B4" variety (quite an unusual one for our railway, as we only have two carriages fitted with this type) has had a trip on the wheel lathe and has been turned out with a correctly formed tyre profile. This will now be stored until it is needed on one of the coaches with this type of wheel. Please excuse the mindless posing, the recent temperature rise in Norfolk after an uncharacteristically cold May has clearly gone to some of the staffs' heads! 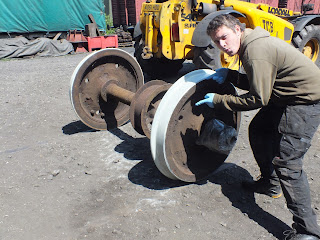 Posted by NNR Carriage and Wagon at 23:12