After last week's "dramatic" report involving the chassis this week holds all of the excitement of Grandma's net curtains. The tasks of steadily progressing the long jobs already in motion have continued as usual.


The bulkhead at the Holt end of the carriage has been sanded down, after having its varnish stripped off last week. More wooden interior parts have been stripped, sanded and repaired. 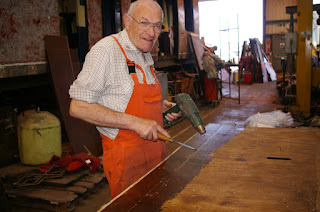 Work has now also started on the ten main passenger windows. The sliding parts have been removed and are in the process of being cleaned up to a fine aluminium shine. These had been painted gold by their previous owner, but we do not require the 1970's restaurant look so will be returning them to their original state. Any repairs to the catches and springs etc are being done as we go along. 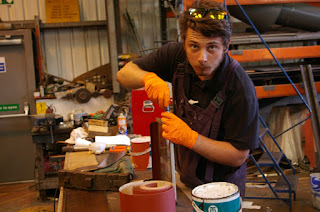 The windows themselves are having all their old sealant and paint removed so that they can be refitted in due course once the bodywork is completed. 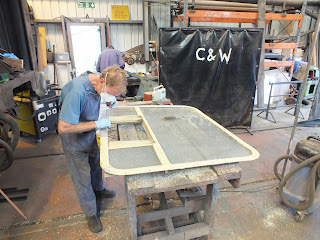 Now that work on E4236 is reaching completion, some resources have become available to return to the exterior doors for E21224. These are currently dismantled and more repairs to the steel skins have been completed. 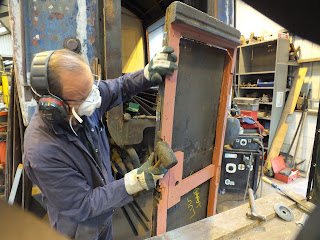 These doors should be able to be built back up before too long. 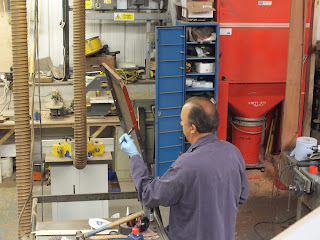 A start has also been made on machining some new hardwood floor supports to replace those which had to be cut out when the bodywork was being undertaken on the seaward side. It is nice to be producing new parts for the coach rather than chopping out old parts!


The interior refresh continues. A great deal of the wooden varnished interior has been rubbed down and a new coat of varnish applied to freshen it up. This task is about 2/3rds completed.

On the exterior, the remaining corridor end woodwork has been fitted to the Holt end, completing this task. 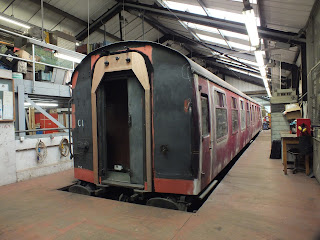 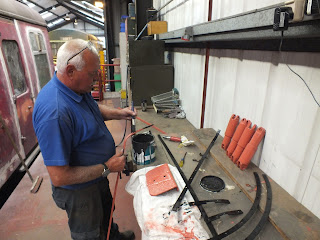 Speaking of repaints, now that E4236's repairs are sufficiently advanced, the vehicle has now been handed over for paintwork preparation. So far the entire landward side has been rubbed down, filled and made ready for the painters. The seaward side is due to follow next week. 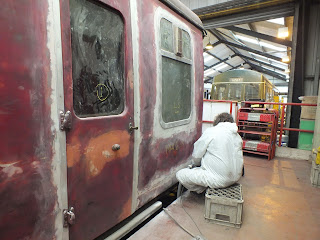 
The space in the shed that M51192 left vacant was not in that state for long, with the same vehicle returning into our midst for more repairs after the diesel gala. This involved it being lifted again for a couple of days. It has now been put back on its bogies, again, and departed the shed once more on Friday. 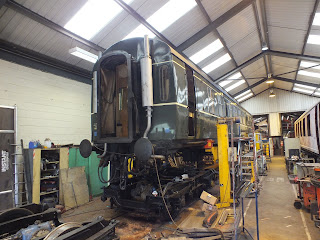 
Before entering service a small contingent from Sheringham were available to give the vehicle a good clean, so it now looks much better. 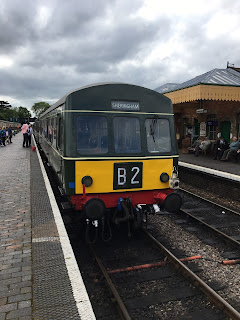 
The wagon has had the wooden deck protected with creosote this week. The wagon itself is now completed and just awaits a suitable load adding to it... 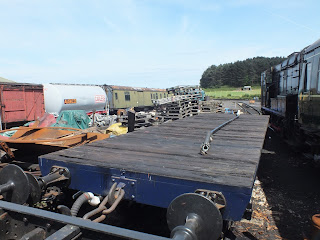 
Work on repairing the Dray at Holt continues.


As part of the Mezzanine storage area project, the shed requires a super-sort out and tidy up with each section having bits that require storing on the mezzanine removing, and what remains stacking and storing properly. The first 1/4 of the shed, the staging area, is now completed and hopefully the new tidy set up can be maintained!
Posted by NNR Carriage and Wagon at 13:00