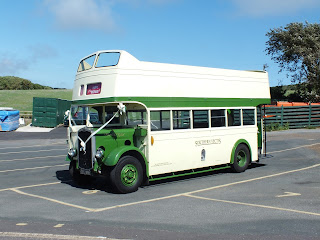 Sadly there has been another gap in Blog updates of late due to more holidays! The culprit this time was a very nice trip to the Isle of Wight for a Birthday celebration on board a 1930's Southern Vectis bus. Of course railways could not be neglected and a visit to the Isle of Wight Steam Railway was also made, a line which regular readers may note has appeared in this Blog before. I make no apologies for mentioning them again and the sterling work they do in their own Carriage & Wagon department. The most modern carriage they operate in (often daily) service dates from the 1920's and the heritage theme they portray is certainly something to inspire most other railways. During our visit they had both early 20th century bogied vehicles and late 19th century 4-wheeled vehicles in service, the pictured example being not a million miles away from our own 853 currently in works. 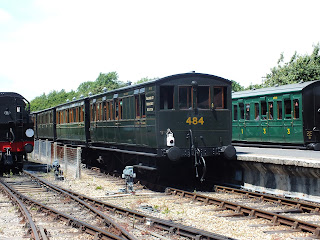 Similarly to 853, the IOW Steam Railway also start out with rather different looking grounded bodies which have been reclaimed from around the island and are slowly transformed over about 5 years in their own C&W works. Some of these future projects are available in their exhibition shed, such as this even older Oldbury body which is part of a future project to rebuild a train from the very dawn of railways on the Isle of Wight. 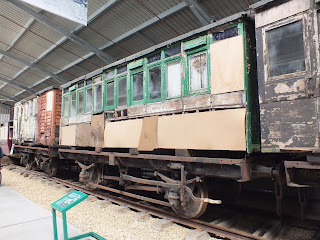 There are tenuous links between us and the Isle of Wight;'s railway system, so prepare for the useless fact of the day! Approximately half a dozen surplus Great Eastern Railway coaches were used on the Isle of Wight up during the 1920's, including a horsebox and six 5-compartment thirds... (many of the latter type still exist in rural Norfolk as grounded bodies, albeit now in poor condition).


Returning to Norfolk, our very own "old lady", GER 853, has only progressed modestly as the M&GN Society's resources have been directed elsewhere of late (see further down). However the vehicle has still progressed with more wooden beading work completed on the seaward side of the body, and the four axleboxes painted up into black gloss. 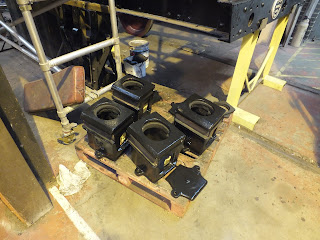 The ends of the axles themselves, on the bearing surface, have been carefully polished back up having been temporarily protected whilst the wheelsets had been in storage outside.


Although nothing new has been started, good progress has been made on all of the current tasks mentioned last time.

More of the compartment veneered wall panels have received their final sanding and are in a protective coat of 50/50 varnish/white spirit.

Progress has been made on stripping old paint off the ten main bodyside windows, which have aluminium frames. The sliding window refurbishment is now almost complete, with 17 (out of 20) now completed, these now look very nice and shiny compared to how they were! 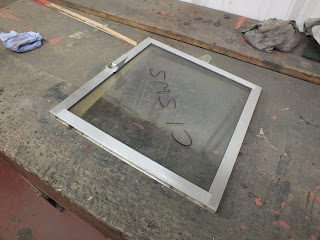 Although none have been finished yet, reassembly work on the ten exterior doors continues with most of the doors being built up a little more with cleaned up components.


The interior refresh of 4236 is now substantially complete, with the re-varnishing of the inside now completed. The seat bases, removed to protect them, have now been refitted and some clearing out of workshop detritus has been done inside! The hinged door at the Sheringham end of the vehicle, which was scraping the floor when it was opened, has been adjusted and re-hung so that it now opens nice and smoothly. Only a few loose ends now remain and the inside will be ready for passengers once again.

The outside now looks very different from just a few weeks ago. The roof has been dusted down and a top-up coat of paint applied to fill up all of the small burns created by steam engine smuts landing on the paint. 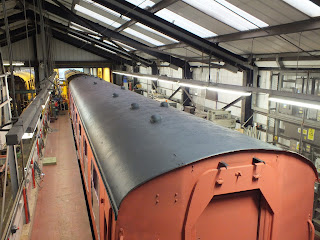 The paintwork preparation of the bodysides and ends has also been completed rapidly and we are beginning to see how smooth the vehicle may look once its been painted. There hasn't been as much time available as a full overhaul to fill and sand the bodywork, and some small compromises have had to be made, however initial indications are that it should look very nice indeed. We have been successful in removing almost all of the visible "patches"which had been letting the vehicle down previously.

This has of course allowed us to move on to the painting itself, as the corridor connections are to be refitted after the repaint this time. The painters have moved in and half of the vehicle, the landward side and Holt end, has been primed this week. 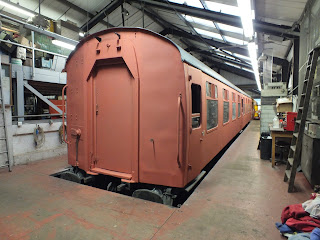 
This van is normally to be found covering a huge number of miles on the main passenger set in use as a bike and buggy carrier. However recently it had been removed from service as its wheels had worn out of profile and require tyre turning. It has now been brought in for some minor works before the main school holiday season starts later this month. 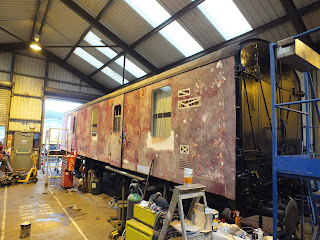 The vehicle has been lifted and the defective wheels removed. Some sticking brake gear was then removed, cleaned up properly and refitted/adjusted so that it works freely once more. The worn brakeblocks were also swapped over with a nice new set. The vehicle was then lowered onto wheels stolen from a similar vehicle (see below) which are still "in profile".

With M94125 now ready to go again mechanically, the very tired looking body has had some (very) rapid attention just to see it through the immediate future. The vehicle is badly corroded and has many temporary patches on it but its time for full overhaul is sadly not now so any loose patches have been repaired and some new ones added. A little bit of welding has been done around the windows and the bodysides are now getting a super-quick rub down to enable us to repaint it. 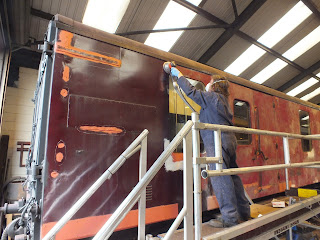 The ends, which are made from wood, have been chipped off of flaking paint and are in the process of having a quick repaint to freshen them up. The Sheringham end is in undercoat and the Holt end is finished in black gloss. 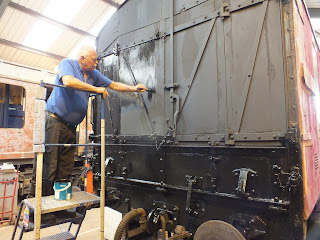 
The railway's other CCT, M94464, was withdrawn from bike carrying duties a few years ago as it had declined too much in condition to keep running. It is currently used as a storage van at Sheringham. As it is not in passenger service, this vehicle has been brought in at the same time as M94125 and has been lifted to surrender its wheelsets to M94125, as there is no time at present to be able to turn the defective ones. No other work is being done to M94464. 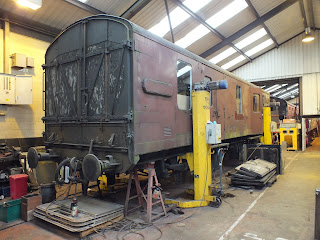 
Explosive progress on the Navy wagon! Now that it is substantially complete, the identity of an ongoing secret project can be revealed... M&GN Society members have been busy constructing a suitable navy-themed load for the flat wagon to be used in the demonstration freight set. A Torpedo was selected as the most suitable candidate and a false one has been under construction for many weeks.

A large wooden frame (which resembled lobster cages) was constructed out of various bits of reclaimed timber and donated softwood, formed into a barrel shape. This was then clad with some thin tin ton create the main tube. 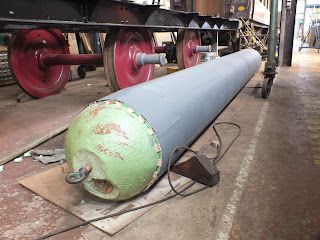 The rear fin was created out of cut down buckets and other bits of rubbish, whilst the "dome" at the front was a sawn off old water tank from a house! 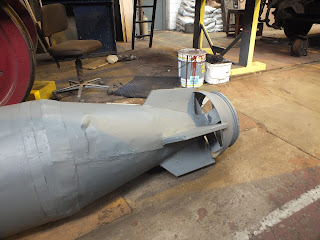 The whole thing was then filled and painted into blue. Last week, the completed Torpedo was carefully lifted into position onto the flat wagon. 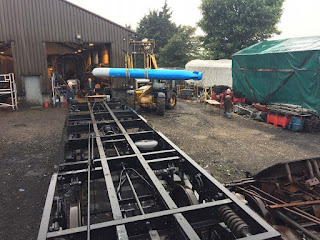 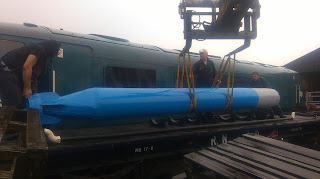 Suitable curved "saddles" were made to support the Torpedo securely on the wagon, and work is now ongoing on refurbishing some securing chains that have been in store for many years to use on the wagon's existing rope/chain loops designed specifically for such use chaining down loads. 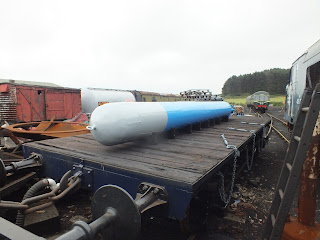 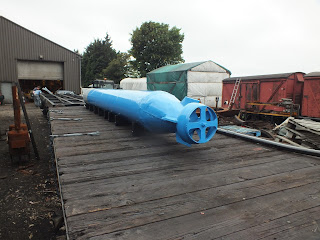 
Work on refreshing the dray is approaching completion. The new wooden components have been repainted in-situ and the remainder of the body re-varnished to increase the protection from the elements. A team of two normally attends to it on site at Holt. 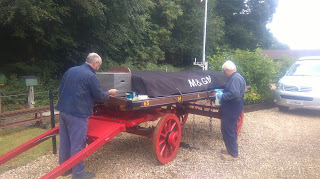 
The Axeman's latest project is part of the ongoing workshop improvements scheme. He is building up some custom sized steel frames which should be able to be stacked on top of one another around the restricted spaces of the workshop and keep components from carriages neat and tidy and off the floor. These components currently either live loose or on top of wooden pallets which in many areas are too large for the spaces we have available in the workshop.
Posted by NNR Carriage and Wagon at 13:40