The nations favorite Norfolk Carriage News is back once again, like a reassuring cup of tea at the end of a long journey home...


Dramatic progress was made when the chassis was lifted off the accommodation flat wagon which was pulled out from underneath. Whilst in mid air the opportunity was taken to extract the two wheelsets (already restored some time ago) from storage and roll them roughly into position so that they are close to hand when they are required. The underframe was then gently lowered onto stands where it will reside whilst the four "W irons" are attached. 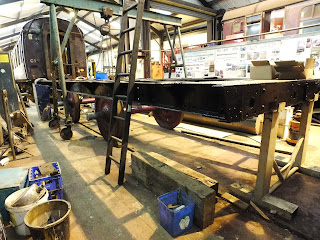 
No prizes are available this week for anybody guessing the progress here... It's been more woodwork varnish stripping! A lot of the separate panels and trim are complete now so the bulkheads on the coach in situ have been started. 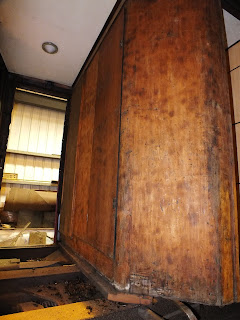 Good progress is also being made on repairing some of the split and missing/rotten sections on some of the woodwork awaiting varnishing. 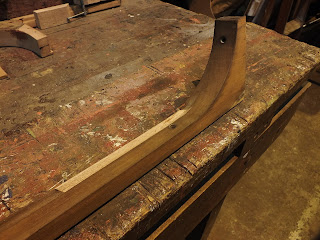 
This coach has seen the most progress of all. On the interior, the ceilings which had to be removed to instigate corridor end repairs have now been refitted, and the saloon ceilings have had a coat of paint to freshen them up. 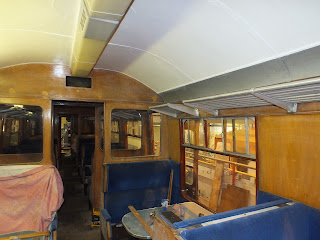 The varnished panels are progressing well in terms of lightly rubbing them down for a top-up coat of varnish. Some poor vinyl signage has also been replaced, such as the labels which inform passengers of the emergency communication apparatus ("do not pull the chain"). Finally, the wooden window surrounds have also received a "top up" coat of brown to smarten their appearance. These were already painted, as opposed to varnished, during a previous restoration.

The exterior has also come on in leaps and bounds. Both ends are now fully welded up with sound metal and new skin. New wooden supports have been made and these have been fitted to the Sheringham end along with the passenger communication apparatus. 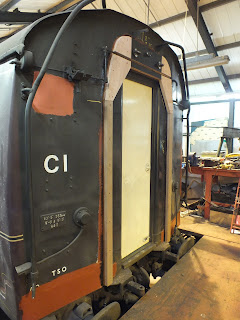 The refurbished windows mentioned last time have been fully sealed in to the coach to try and stop water ingress, although I'm sure it will find a way!

The doorways are also fairly advanced, with the aluminium weather strips fitted to the door apertures and sealed in. This then allowed the six doors themselves (already refurbished) to be refitted. The coach is now nearly whole again from the outside! 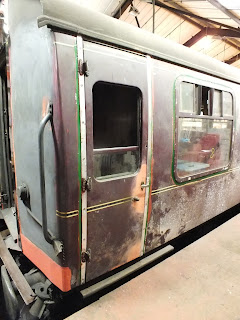 
It was a race against time for the Locomotive Department to get the vehicle serviceable in time for the diesel gala. Although there are ongoing issues, the vehicle was deemed fit to operate for the weekend, being finished just a day before the event! The road M51192 occupied has once more become vacant.


This vehicle has now returned to traffic, and has been in use with M51192 for the Diesel Gala. The coach was filthy however after spending a period inside the workshop and we were lucky that a small contingent from Sheringham were available to give the vehicle the once over before the event. Cinderella made it to the ball! 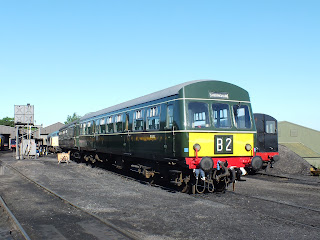 
The Navy wagon was moved out of the workshop to make space for re-wheeling 853. This has allowed some rotten parts of the decking to be replaced so it is acceptable once more. The deck is now waiting to be creosoted to give it some protection from the great outdoors.


The horse dray from Holt has sadly deteriorated rapidly in the short time it has been up there, so part of it has been removed and brought back for some remedial woodwork repairs. A new front top rail has been produced and the horse shafts have been sanded back, resin applied and then primed as the paint was flaking off badly. 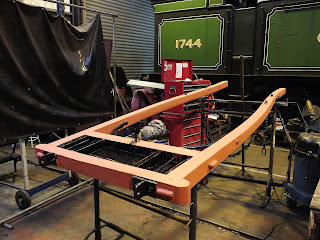 Posted by NNR Carriage and Wagon at 23:39